For those who love the contemporary forms of tango music, Messechina Music organizes 2 concerts of the Argentine tango group Astillero in Sofia on 20 and 21 April at the Central Military Club.

Astillero opens the challenge with its music. This rock-solid group starts tango out to a completely new vision, rough and violent, according to the times we live in. Astillero is a tango formation that has nothing to do with the "tango" of our collective conciousness.

The orchestra, even though it is composed of classical instruments associated with tango, is revolutionary. It is the first sextet in the history of tango formed by two bandoneons, violin, cello, double bass and piano. And there's more: they only play their own new compositions. They have a repertoire of new tangos, instrumentals and songs, generating their own identity, inextricably linked with modern life. The sounds of Astillero are the sounds of Buenos Aires today and the way they play the music refects the unbalance of this city in which we are inmersed. It kicks, breaks, hurts, moves. The new lyrics add their weight in this rawness. A rough but tender voice, that cares and tears at the same time. But the concept does not end there, but keeps on developing by means of video images perfectly designed to join this hecatomb of sound. Impacting in shapes and colors projected over the players, completing the dynamic of the music.  An innovative proposal, original, different, to enjoy the new wave of tango : Tango de Ruptura.

The members, although young, have an important history among the genre. Their experience and research as musicians has led them to a fundamental teaching duty which is carried in different institutions (School of Popular music of Avellaneda, Conservatory of Styles Argentino Galván, National Academy of Tango, in between others) and for the last two years, in the Orlando Goñi School, created by themselves and other young tango musicians.

Since the conception of Astillero the group has earned international recongition thanks to diverse tours. In Europe they are well known and called back every year to take part in diferent events. This year, for instance, the Orchestra has been selected out from 900 groups from all over the world to be part of the prestigious « Womex », Music World Festival.

The activities of the orchestra go on and its music is gaining ground. The solid esthetic of Astillero attracts new groups as old masters. This is reflected in their compositions that pose a completely new approach to the genre. So much so that in November the new album « Sin descanso en Bratislava (Glosas fuera de tiempo) » will be released, including a very special guest Master Leopoldo Federico.

More information can be found on the special event website from where you cana also download photos and where you can listen to Astillero's music:
www.messechina-music.com/astillero/

You can buy tickets for the concerts in Sofia from Eventim.bg, more details here:
www.eventim.bg/portal/bg/muzika/jazz/stillero/51562/

More information about the teaching dancers:

CRISTIAN CISNEROS & VIRGINIA PORRINO
Cristian and Virginia are world renowned tango dancers, famous for their classical style of tango. They have performed in many show such as "El Querandi", "Sabor a Tango", "Cafe Tortoni" etc. Cristian and Virginia have toured extensively in Argentina and the rest of the world, demonstrating their ability in famous theatres such as the "National Cervantes", "Astral" and "President Alvear". They have performed on TV programmed such as "Argentissima", "La Noche con Amigos" and "El Gran Debut". Between 2003 and 2007 they were part of the famous show "Forever Tango" and since 2000 they are part of the cast of TANGO SEDUCCION.

ARIEL PEREZ & ESTHER GARABALI
During their tango dancing career, Ariel and Esther have danced with first class artists around the world - in South America with Julio Iglesias, in the United States with Atilio Stampone's Orchestra. They have also been part of the cast of "Argentina Tango Review" presented in the United States and "Historias de Tango" and "Tango Venus" presented around Japan. They were also a part of the Mariano Mores Orchestra show. In Argentina they have danced in renowned shows like "La Ventana", "Cano 14", "Michelangelo" and "La Esquina de Carlos Gardel". In 2002 they joined the cast of TANGO SEDUCCION. 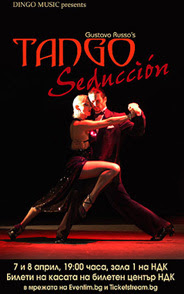 Tickets are available at the box offices of DKS Varna, DKS Veliko Tarnovo, Bourgas Opera, Dohodno Zdanie Rousse, NDK Sofia, in the networks of Ticketplus.bg, Eventim.bg  and  Ticketstream.bg (including online), at Piccadilly Supermarkets and Office 1 Superstore.

TanguerIN Studio is an official partner of this event.

Pictures from the show...