“TANGHOST” -
Based on Henrik Ibsen's "Ghosts"


TanguerIN Studio in cooperation with The Royal Norwegian Embassy and The National Theatre organizes the Sofia tour of TanGhost – an adaptation of Henrik Ibsen’s play “Ghosts” - representing a fascinating combination of theater, tango, music, dance and video art. It is produced by POS Theatre Company from Norway with the participation of the world famous tango dancer and choreographer Pablo Veron. There will be two performances of TanGhost at the National Theatre in Sofia - on 20 and 21 October, respectively. 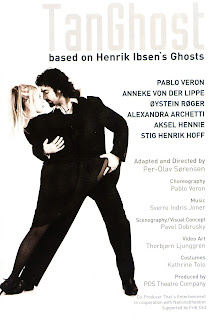 “TanGhost” is a fusion of Ibsen’s classical text of ”Ghosts”, world renowned tango dancer Pablo Veron, new original music by Sverre Indris Joner, video art, and supreme actors from Norway – ”Henrik Ibsen’s home” – all is a very unusual and exciting combination. This is a project in which a new generation of directors, designers and performers combine their talents in dance, music, video, scenography with texts of classical plays into a uniquely new theatrical fabric.

The Argentinian tango star Pablo Veron, known from the movie “The Tango Lesson”, directed by Sally Potter, is both actor in the production as well as its choreographer. As the performer of Ms. Alving’s dead husband, Mr. Veron adds another character to the original five written by Ibsen. The visual concept of the production is a combination of imaginative lighting, video art and animation and Dobrusky’s simple, yet magical scenography. “TanGhost” is filled with Sverre Indris Joner’s new original tango-esque music, with obvious links to modern beats of hip hop and Nordic sound of jazz.

The play has been receiving fantastic reviews and has played for packed houses with ecstatic audiences at The National Theatre's mainstage in Oslo and during several tours in Norway and is now undertaking an international tour.

The year 2006 will mark the 100th anniversary of the death of the Norwegian playwright Henrik Ibsen. The Norwegian Ministry of Cultural Affairs has decided that this is to be commemorated as the Ibsen Year all over the world. Throughout the year, a wide range of events will be arranged both in Norway and abroad, which will highlight the importance of Ibsen’s legacy and provide opportunities for fresh interpretations of his work. At least one of his plays will be performed on a stage somewhere in the world every single day. In Bulgaria, The Royal Norwegian Embassy in cooperation with the National Theatre and Sofia University organize throughout the year a series of events dedicated to Ibsen, which will include, readings, exhibitions, conferences, discussions and, of course, performances of Ibsen’s plays. The performances of “TanGhost” in Sofia will be one of the key events of this initiative marking the first ever visit in Bulgaria of a theatre company from Norway.

The magic of the argentine tango

TanGhost incorporates into Ibsen’s chilling psychology the expressive power of Argentine tango which is brought to the stage by Pablo Veron, one of the most popular tango dancers in the world, the star of the movie The Tango Lesson by Sally Potter and of the legendary Broadway show Tango Argentino.

With its sensuality, mistyreousness and unique aesthetics the argentine tango has become extremely popular around the world. In the last years the Bulgarian audience has shown a great interest in the argentine tango filling up the concert halls to see visiting tango musicians and dancers. The performances of TanGhost in Sofia are expected to appeal  both to theatre and tango lover, thus drawing significant attention and turning into one of the key cultural events of the season.

The tour of TanGhost in Sofia will be accompanied by a series of tango workshops given by the famous Argentinean maestro Pablo Veron.

The combination of Ibsen’s theatre and tango in “TanGhost” naturally led to the cooperation in the organization of this project between TanguerIN Studio and The Royal Norwegian Embassy. The Embassy has been actively supporting and participating in the organization of various events associated with the Ibsen year in Sofia. TanguerIN Studio, on the other hand, is an organization promoting the performing arts in Bulgaria, with its current focus being the dance and, in particular, the argentine tango and its fusion with other art forms. "Tanghost" naturally attracted the attention of TanguerIN Studio when searching for a high-profile hybrid project with world class artists to bring to Bulgaria. The performances of “TanGhost” will be hosted by the National Theatre in Sofia, the most prestigious theatre institution in Bulgaria which is also a partner in the commemoration of the Ibsen year.

The Sofia Tour of TanGhost is organized with the kind support of Festa Barcelo Premium Hotel, Nera Bulgaria and InterConsult Bulgaria / COWI

The official page of the project is http://www.tanghost.com

The official page of the Bulgarian tour of Tanghost is http://tanghost.tanguerin.com