On 11th December, tango lovers around the world celebrate Argenina's National Day of Tango. On this day TanguerIN Studio and the Red House Center for Culture and Debate in cooperation with Tango Festival Buenos Aires and Classica Gallery organize in the Red House building on 15 Luben Karavelov St.  a series of events dedicated to the argentine tango. Its culmination will be the opening of the photo exhibition "Argentine Tango - from Buenos Aires to Sofia", which will be on display at the Red House Center until the end of December. The events celebrating the Day of Tango are taking place with the kind support of the Embassy of the Republic of Argentina and are sponsored by Linexa Property. Media partners of the project are One Magazine and Retro Radio.

The complete scheduled of events is as follows:

The photo exhibition and all other events celebrating the Day of Tango are conceived and coordinated by TanguerIN Studio, an organization promoting the argentine tango and the authentic tango spirit and culture in Bulgaria through dance classes and workshops, dance parties (milongas), concerts, lectures, exhibitions, discussions and other events related to the dance and music of tango. A year ago, TanguerIN Studio deliberately chose the Argentina's National Day of Tango as its launch date and by celebrating it now TanguerIN also marks its first birthday. 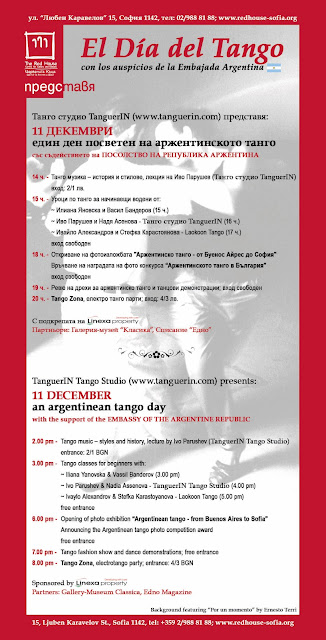 with the support of the EMBASSY OF THE ARGENTINE REPUBLIC
sponsored by LINEXA PROPERTY
media partners: Edno Magazine, Retro Radio

The photo exhibition "Argentinean tango - from Buenos Aires to Sofia" aims at showing how argentinean tango is represented and experienced in two places in the world, Argentina and Bulgaria - two distant countries with respect to both geographical position and historical relation to tango. Argentina is the birth place of tango, where this music and dance have been part of people's daily lives for more than 100 years. Bulgaria is a country where the authentic argentinean tango appeared only in the last decade, but quickly and surely gains popularity.

The exhibition is situated in two parts. The first part exhibits the photos from the photo contest Las Milongas en Argentina, the fruit of a joint effort by the VII Buenos Aires Tango Festival, the Argentine School of Photography and Fotomundo magazine, sponsored by Kodak Argentina. This contest aimed at directing the photographer's eye to milongas as representations of the Argentine popular culture but excluding the stage tango sphere. The pieces were meant to depict people at dancehalls, clubs, parties, on the street, or any dance gathering where a feeling is embodied, taking shape to the rhythm of Tango. They could also reflect an atmosphere, the wait-by-the-table ritual, the decoration, the orchestras indeed, as well as those details that contribute to a deeper understanding of the milonga essence.

The second part exhibits photos from a similar contest, which took place in November 2005 in Bulgaria and was jointly organized by TanguerIN Tango Studio, The Red House Center for Culture and Debate and the Embassy of the Argentine Republic in Bulgaria. The aim of the Bulgarian contest, named The Argentinean Tango in Bulgaria was to represent the activities of the tango community in Sofia. During the opening of the exhibition the winner of the contest will be announced and awarded a prize.

Combining the best works from both contest, the exhibition shows how the spirit of the music and the dance erases the borders, the distance and the differences between two nations and will serve as a cultural bridge between Bulgaria and Argentina. The exhibition will also be a big milonga - during the opening hours argentinean tango will be played and all the visitors will be free to dance.